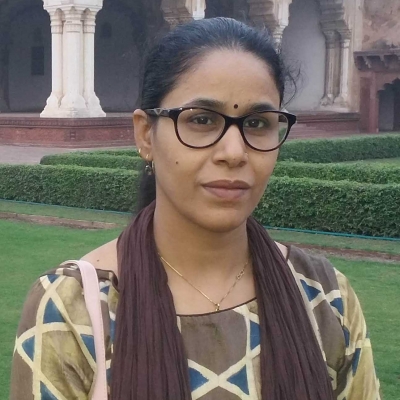 Jasminder Kaur hails from Varanasi and has earned her academic credentials from Banaras. Hindu University. She is a Gold Medallist and Merit Scholarship holder of BFA and MFA course. She was awarded a doctoral degree in Textile Designing in 2007 by the University. Her artistic journey started with winning awards at the school level. She bagged the most prestigious state award for securing 1 position in the subject of Arts in Uttar Pradesh. In 1997, Jawaharlal Nehru Memorial fund bestowed her with the Best Student of the Year award for her academic achievements. This same year, the Prime Minister honored her for academic excellence. In the year 2002, her post won the d in National competition held by the Ministry of Environment and Forest. since then she has added many feathers to her cap.

Dr. Kaur started her professional career as a Free-lance Designer and later in 2005 joined Banasthali Vidyapeeth as a lecturer of Textile Designing. After serving there for a brief period, she returned to serve her alma mater in 2007 and is working as an Associate Professor of Textile Designing in Banaras Hindu University. The home-coming was full of challenges. It was the time when once-blooming handloom industry of Varanasi Region was undergoing a severe crisis. She worked devotedly for the revival of handloom and did everything in her capacity for it. Her efforts were acknowledged by the Government of India and the prestigious event of Lakme Fashion week 2015 witnessed her honor for the contribution in the promotion of Handloom.

The belief that "what is can be imagined, is can be created" inspired her to experiment with the textile techniques with Block printing and Bandhej as focus subjects. The results were very encouraging and she displayed her creations in solo shows under the titles of Kalpvriksha-1, Kalpvriksha-2, Kalpvriksha-, Recreating Bandhej- 1 and Recreating Bandhej-2. The present show is another one of this series. She has also participated in numerous International, National and State level exhibitions at Lalit Kala Academy, Artscape, All India Exhibition of Arts, The Indian Academy of Fine Arts, State Exhibition of Arts U.P. and many others eminent art institutions. Her work on Textile is widely appreciated and she is regularly invited for the guest lecture as an expert of textile and handloom in many institutions. Government institutions such as Weavers service center, NIFT, and Silk board invite her to educate and update the weavers and others related to textile industry. She is working on innovative technique in Textile designing and has completed three major projects with UGC and Design Innovation Centre of MHRD, Govt. of India. Her works are with many private collectors in India and abroad.